Audience And Purpose: Who Are You Teaching And Why? 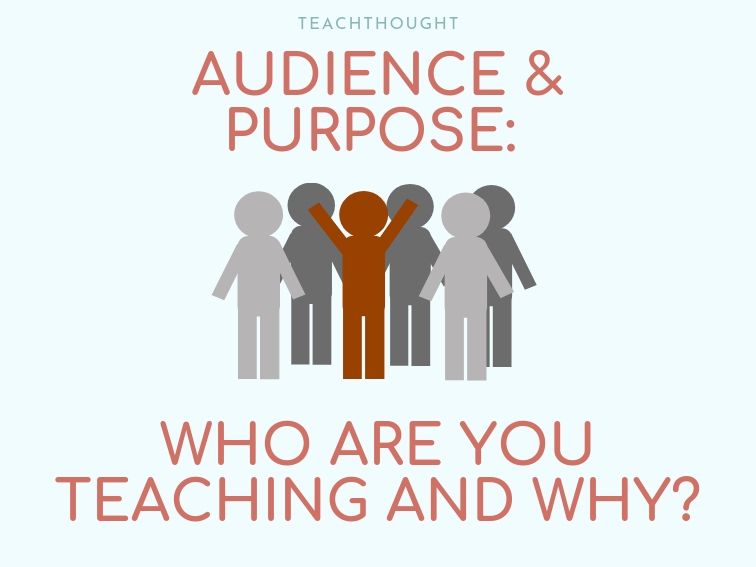 Audience And Purpose: Who Are You Teaching And Why?

One thing leads to another.

And by some impossibly chaotic by still entirely functional collection of digital possibility, you’ve turned on something electronic and ended up here, reading this. Things connect.

And so it was for me as a teacher. Being an English teacher—that is, a teacher of literature, the writing process, grammar, critical thinking, close reading, decoding, digital media, speaking and listening, and well you get the idea—was a very plaid experience—all divergent and striped and blocked and geometric but still somehow stitched together.

As curriculum and content, ‘English’ is really a matter of understanding communication—who said what, how did they say it, and how can you use similar patterns to say things yourself? Diction, tone, grammar, theme, thesis statements, mood, structure, idea organization, supporting details, main idea, literary devices, and dozens of other things are all pieces in service of communication—both sending and receiving.

For some reason, once you get to college, communication is chunked into a matter of public speaking, but that’s like teaching ‘shapes’ independent of geometry. Speaking is first a matter of knowing.

So traditionally in English you take a close look at dead people that said noteworthy things, literature being ‘news that stays news.’ You take apart what they said, try to understand why they said it, and write a paper or take a test on it. Franz Kafka, Robert Faulkner, Flannery O’Connor, Emily Dickinson, and countless other people that have lived but not anymore at one point were moved to say something, wrote it down, and here we are centuries later bubbling in scantrons about it all. It’s a bit weird.

But studying their poetry (here’s a simple definition for poetry) and speeches and novels and other recorded and highly formatted musings led me to see it all as a matter of purpose and audience. Every time we study a piece of literature, or the concept of writing, it was the same pattern.

What was said, and to whom?

The Order Of Thinking

This came in handy when I started taking a look at digital media and other technology in service of the study of English-Language Arts curriculum. A YouTube video, like a poem, has the same fundamental characteristics, just different modalities–word choice, structure, idea organization, tone, and the other bits that connote academic study. But each also has an audience and a purpose—and without understanding the audience and purpose, none of the other stuff makes sense.

You can’t evaluate the word choice of a poem until you have some kind of idea why it was written—and who it was written for (if anyone). The context. You can speculate all day long about what he or she said and how he or she said it, but you’re only speculating. You weren’t there.

You can analyze the meter or count the lines, but the poem itself is a conjuring born of audience and purpose—which makes it a nearly human thing itself. Something was said to someone for some reason, and everything works backwards from there.

Audience and purpose are primal. They have to come first or none of it makes any sense. And so it goes with pedagogy. Who are you teaching, and why? Who exactly, and why exactly?

When students start on projects for project-based learning, have them start with audience and purpose. What are you doing and why are you doing it? And for whom?

The same with ed reform. How can we revise a school or iterate education until we know what a school is supposed to do or what an ‘education’ is? That’s purpose.

And most critically, who we’re doing this all for. Who is the ‘audience’ of education? We don’t do this for curriculum or standards or test makers or corporations or universities or even ourselves. We can say it’s the students—so then let’s check that. Let’s look at all of our systems and parts and practices and see if they point to the audience. Or we can start with our audience and work backwards from there.

Understanding audience and purpose is critical for reading and writing. And project-based learning. And digital media. And ed reform. And pretty much everything else. The sequence of education itself begins with audience and purpose. So let’s start there, too.

Who are you teaching?