What Is The Difference Between Logical Fallacies And Cognitive Biases? 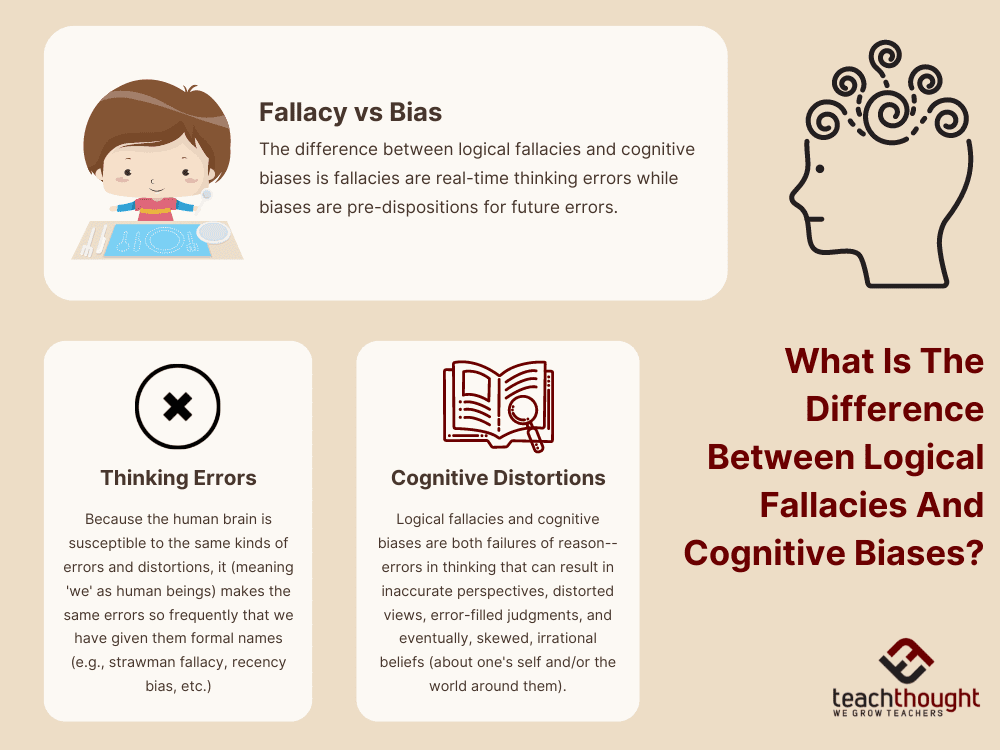 What Is The Difference Between Logical Fallacies And Cognitive Biases?

What are logical fallacies and cognitive biases?

In short, logical fallacies and cognitive biases are both failures of reason–errors in thinking that can result in inaccurate perspectives, distorted views, error-filled judgments, and eventually, skewed, irrational beliefs (about one’s self and/or the world around them).

Because the human brain is susceptible to the same kinds of errors and distortions, it (meaning ‘we’ as human beings) makes the same errors so frequently that we have given them formal names (e.g., straw man fallacy, recency bias, etc.)

In this way, they are similar in that each is a common thinking error.

The Difference Between Logical Fallacies And Cognitive Biases

The primary difference between logical fallacies and cognitive biases is that the former are failures of reason that are usually occurring in the moment while the biases represent individual, ongoing pre-dispositions to future errors of reason.

An important difference between fallacies and biases is that biases determine/affect/distort how you evaluate, on an ongoing basis, data, truths, or circumstances. Logical fallacies, however, have more to do with how you make claims and construct arguments.

An Example Of A Logical Fallacy

In What Is Confirmation Bias, I said that, “One of the many cognitive biases, whether based on fear (e.g., ‘I’m going to lose my job’) or inaccurate and/or incomplete data (e.g., a stereotype), someone who falls victim to confirmation bias will form an opinion and then seek out and/or overvalue data that supports that opinion. In the former example of losing your job, because of worry over losing your job, you would begin to ‘notice’ things that seemed to support that theory.”

For example, the common ad hominem fallacy occurs when someone attacks the validity of a judgment or claim by attacking the holder of that claim rather than the claim itself.

Person A: A politician said we should invest more money in education.

Person B: I don’t like that politician. He lies about everything and has a history of bad ideas.

While both the politician and Person B here can both be (more or less) correct in their claims (that we should invest more money in education and the politician in question may indeed have a history of bad ideas), Person B is attacking the person instead of intellectually criticizing the claim itself. Classic ad hominem.

An Example Of Recency Bias

However, a person prone to recency bias will favor recent events and data over the more complete picture of reality or truth. This bias will cause the person to over-emphasize some data and completely miss other data–and thus commit more fallacies and likely develop more cognitive biases and related worldview distortions.

The Definition Of A Logical Fallacy

A logical fallacy is a mistake in reasoning. It occurs when someone draws a conclusion that does not follow from the evidence or when someone relies on a faulty assumption. There are many different types of logical fallacies, but they all share one common effect: to mislead people into thinking that the conclusion is valid.

The Definition Of A Cognitive Bias

A cognitive bias is a type of thinking error that results in judgments and decisions that are systematically distorted. This can lead to inaccurate beliefs about people, situations, and the world in general. Cognitive biases are often studied in psychology, as they can influence the way people think, feel, and behave.

There are also many dozens of cognitive biases–a few examples include the sunk cost fallacy, confirmation bias, gambler’s fallacy, and anchoring bias.