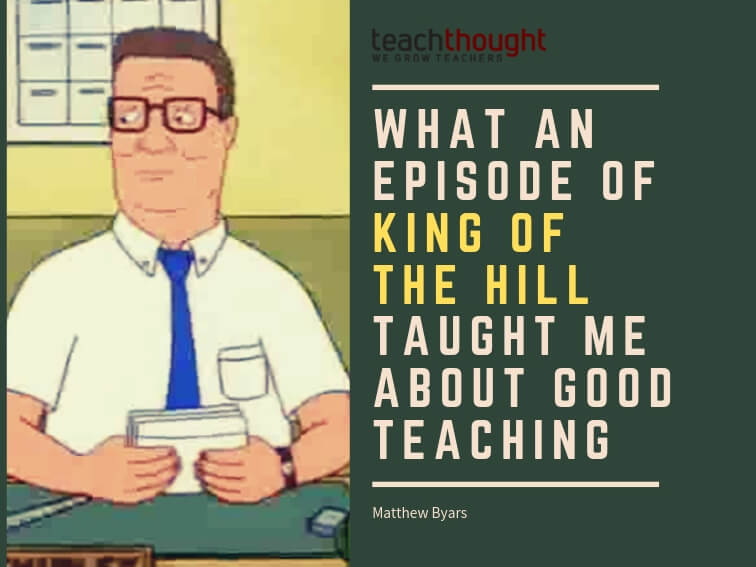 There’s an episode of the animated TV show King of the Hill in which Hank, the curmudgeonly, old-fashioned father of the family, becomes an emergency substitute shop teacher at his son Bobby’s middle school.

Rather than following the standard narrative in which Hank is overrun by disobedient kids and general chaos ensues (and Hank gains a new appreciation for how hard the job of teacher is, etc., etc.), the show has the ever-industrious Hank–who loves all things shop and tool-related–realize that there are actual needs in the school itself that the kids can meet by building and fixing things themselves.

Hank, with no training as a teacher, no toolbox of pedagogical moves or philosophies–and definitely no experience–brings a clear-eyed vision to how he and the kids can be effective and useful, and the kids are transfixed by and passionate about the work they then undertake. And Hank does all this without any teacher ‘training.’ So I think the question may be this: if Hank had gone through a standard teacher training program, how would he have approached his teaching assignment? I’m guessing he would have followed some, if not all, of the following steps:

-consulted his state’s (Texas, in this case) benchmarks for shop class;

-given a formal diagnostic assessment to evaluate student understanding;

-gathered the data that came from that, then, grouping his students according to ‘ability’ based on the findings;

-differentiated the assignment for each of these groups;

-told them how to do what they were supposed to do;

-give them a rubric that shows them how they’d be assessed in every aspect of their work;

-assign homework that ostensibly makes them practice what they’re trying to do, and quite possibly grade them on its completion;

-using the rubric, give them a grade based on the results of their work, or possibly just giving them a test about the work they did;

-recording this data for his own record keeping.

This, of course, is the process we currently recognize in many, if not most, classrooms as ‘teaching.’

However, based on Hank’s approach and ultimate success with the kids, it begs the question: is the above approach necessary? Is this how we’d actually go about this process if we wanted kids to learn something, and if traditional school and its approaches somehow didn’t exist?

Hank has great success while totally following a natural, logical, and easily understandable process in service of an important task that clearly interests the kids; there’s a ‘story’ to the work they’re doing, you might say, and as such, the purpose and procedures are clear for everyone. While the general notion implied in the rhetorical answer above (assess where they are, figure out what they need to go forward) remains intact with Hank’s approach, I’d argue that a lot of the complexity of what is often identified as ‘teaching’ is unnecessary. It certainly was for Hank.

So, do many current teacher training programs prepare people entering the profession to be Hanks, or teachers who employ a complex system of tools that often obscure the obvious? A loaded question, for sure, but let’s consider the specifics of what Hank did when he realized that the kids were unengaged in his classroom and that their previous work was lackluster:

-he gauged where the kids were instantly by simply having a sense of purpose for the class, as “shop” is something of which he’s a practitioner; he could see from their previous work (in this case, awkwardly cobbled together birdhouses) that their shop skills were undeveloped;

-because he knows what the ‘practice’ of shop is actually about, he then introduces project ideas he seems to instinctively know they’ll be interested in (and they are);

-he starts with the procedure of them putting on safety goggles, which they do willingly because it’s in service of something they want to do, rather than something divorced from authentic work and purpose;

-during this process, Hank even notices a kid who’s a “troublemaker”–unengaged–and finds a project he thinks the kid will be interested in.

Now, the steps Hank follows are, to a degree, a simplified version of the steps I suggested above that a trained teacher might go through.  However, the word to pay attention to there is “simplified.” For many teacher training programs, complicating these natural and fairly obvious steps (likely driven in large part by the high-stakes accountability movement of recent decades) clouds the process that is actually built into us as humans.

We’re born to apprentice, to watch the masters, observe their moves, and imitate them ourselves. Hank knows this intuitively. And while this isn’t a simple process, per se, Hank’s understanding of his purpose in this role (and, subsequently, the purpose of the class) leads him to make all the right decisions at each step of the way.

Meanwhile, in a scene that takes place shortly after the one above, Hank’s wife, Peggy (a substitute teacher herself with a vainglorious sense of her own importance), advises Hank at the family’s kitchen table of the “unified theory of education” that she’s developed:

“Hank, I’m going to do for you what, at the beginning of my career, I did for me: create a unified theory of education. Now, teaching can be divided into seven spectras: the salutatory, the attendatory, pedagoguery… wait, how did it go? Let’s see, ‘Sir Arnold Prefers Dining…’ D. Disciplinaria…”

Hank ignores Peggy’s ‘unified theory of education’ because it doesn’t make sense to him; Peggy is appalled. (Hank’s explanation of his success: “You professional teachers probably have a special term for it, but I just fell back on natural instinct; it might not have been a pretty win, but I’ll take it.” Definitely describes PBL at times, no?)

And an additional, impassioned statement made by Hank in this moment speaks volumes, too: “You see, this is why we do shop; not to be popular or get into college, but to sand and drill and chisel things.”

While it’s certainly meant to be a comic moment, it gets directly to the idea that purpose lies at the heart of all enduring learning, and that all the data collection and pedagogical strategies take us away from the most important part of our job, one which is relational in its essence, and that should always strive to be deeply purposeful for every human being involved in it.

Matthew Byars is an adjunct instructor at the Johns Hopkins University of School of Education and a middle school teacher and administrator at St. Paul’s School in Baltimore, Maryland.  He’s worked as a special education teacher in self-contained and inclusion classrooms, as well as in public and independent schools in urban, rural, and suburban districts.

← From Tech To Pedagogy: 8 Tips For History Teachers The TeachThought Podcast Ep. 152 Reading Lessons Learned From A Child Left Behind →