We Should Teach About Uncomfortable Ideas, Here’s How 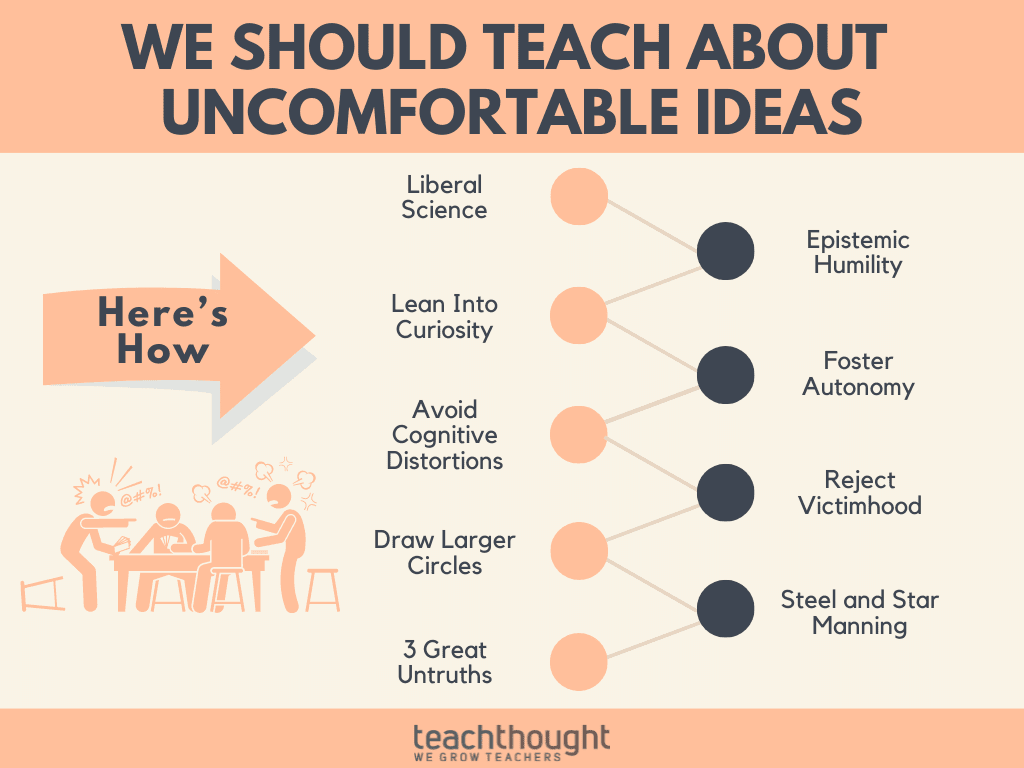 We Should Teach About Uncomfortable Ideas, Here’s How

How can we identify a democratically ideal set of principles to help us grow a culture of conversation?

In my 15 years as a K-12 teacher, I rarely found myself at risk of being in trouble for what or how I was teaching. Perhaps I was just lucky but it wasn’t because I avoided topics and discussions that today might warrant ‘cancellation’.

Sometimes I wonder how this might have played out differently were I to teach like that today. It seems undeniable that today’s students, parents, school leaders, and political leaders can be more reactive and sensitive to challenging material, ideas, language, and exercises or activities. What used to be fairly commonplace can now be expected to be a trigger to be avoided for fear of controversy and protest.

No doubt some of the practices of the past are worthy of such scrutiny but have we created a culture that disallows productive conversation for fear of causing harm and/or avoiding controversy that might lead to some sort of ‘canceling’? I think so but it doesn’t have to be that way. In fact, I think we have a duty to have our students engage with content and conversations that might be uncomfortable but we must do so in a way that is not driven by ideology but guided by the tenets of liberal science that make the United States exceptional when at its best.

I initially taught special education, behavior disorder students to be precise, at the middle school level before moving into regular education, social studies, at the middle and then high school for the last 11 years. 2012 was my last year in the classroom and I was teaching AP psychology, general psychology, and integrated social studies (Gov/Econ/Geography) to 9th graders.

Teaching history and government I regularly invited my students to engage with topics and experiences ranging from the Atlantic Slave Trade, the Holocaust and D-Day, various wars and revolutions, and the journey toward justice known as the civil rights movement. In learning about all of those topics it wasn’t unusual for me to present things that were uncomfortable and in fact at times expressly designed to create discomfort. I believe in the power of learning through inquiry and sometimes a great way to spur important questions and thinking is through elements of cognitive dissonance.

In US history we watched the Omaha Beach scene from Saving Private Ryan as well as a significant chunk of the Holocaust documentary footage, Memory of the Camps, which included nude prisoners sometimes alive and others dead as they were tossed and bulldozed into mass graves. The civil rights era of course, also brought plenty of opportunities to present difficult questions and facts about the effects of racism, past and present, that I was never shy about. If I were to teach that content again I’d likely look to use even more ‘controversial’ ideas like the central question of the 1619 Project or statements like this one by Ibram X. Kendi, not because I like controversy but because they’re powerful ways to engage with the content and determine what is true.

In my psychology classes, I typically asked students to learn about and wrestle with the complexities of things like mental disorders (including the fact that homosexuality was once considered one), sex and gender through the lens of masculinity, femininity, and sexuality, and the likelihood of historical racism in the field including asking them to take the Chitling Test to spur inquiries. Much of this content definitely challenged my students who lived in our rural, politically conservative, and significantly Christian town.

Why was I able to teach these potentially dangerous topics and ideas without much trouble? Surely the times were different and that was a factor but I’d assert that striving to remain true to the ideals of liberal science and the cascading norms of conversation using an inquiry stance helped tremendously.

What is Liberal Science?

Because there are some who will instantly and ignorantly shut down because of the word ‘liberal’ I would love to find a better term, but liberal science is not to be confused with liberal politics or the Democratic party, or any sort of leftist ideology. In fact, liberal science is consistent with and incredibly foundational to the ideals and foundations of our democracy that traditionally conservative and Republican people also advocate for. Just like patriotism doesn’t belong to the ‘right’, neither does liberal science belong to the’ left’. Sadly, our recent cultural shift away from these ideals is putting that democracy at great risk.

In short, liberal science is an open-ended and continual process of depersonalized checks of truth by anyone and everyone searching for errors. What follows is the recognition that no one person or group gets the final say on what is true or is protected from criticism. For a deeper dive into liberal science I urge you to read the work of Jonathan Rauch. His 1993 book , Kindly Inquisitors and 2021 The Constitution of Knowledge masterfully detailed the concept.

What is a Culture of Conversation?

A culture of conversation, especially in our schools, helps us navigate the complexities of difficult and often divisive topics. It leverages inquiry teaching and learning with contextually relevant content and knowledge that helps discover truth more than it reinforces ideology and beliefs.

The Culture of Conversation that is consistent with liberal science includes features like:

K-12 education serves many purposes and one of them is to help develop children into productive and happy adults. Part of that includes being the kind of active and informed citizen that our democracy demands. Far from perfect, our country’s system relies on good faith actors and the possibility of dissent.

In order to counteract the threats of indoctrination and recognize and reckon with the ugliest breaches of our democratic ideals our schools must engage in liberal science through cultures of conversation. Anything different brings us closer to orthodoxy and authoritarianism which know no partisan bounds.

We can not afford to bury our heads in the sand and avoid contentious topics. Instead our schools and educators need to redouble our efforts to engage in those democratic ideals that bring out our best and marginalize any who seek to indoctrinate and shut down ideas and thinking that doesn’t fall in line with their orthodoxy.