The Difference Between A Good Question And A Bad Question 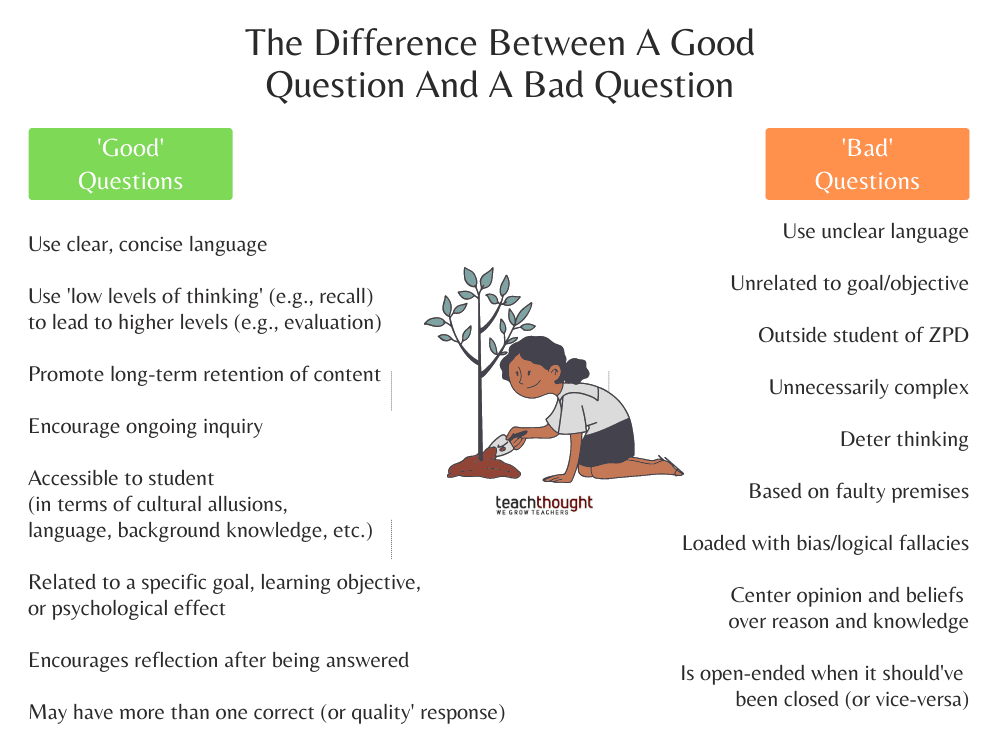 The Difference Between A Good Question And A Bad Question

What’s the definition of a ‘good question’?

We often say to one another, ‘That’s a good question,’ by which we usually mean, ‘I don’t know the answer’ or ‘I had not yet thought to ask that but it seems worth asking.’

We can begin to define a good question by taking a look at its opposite. A question can be ‘bad’ for a number of reasons. A question is only a strategy (for inquiry) and must therefore have a purpose or intention if we want to evaluate its quality.

(I’ve wondered about the Purpose Of A Question before which I included in our Guide To Questioning In The Classroom).

It must have some kind of goal.

So most broadly, a question could be said to be ‘bad’ if it either doesn’t have a purpose or intention or doesn’t accomplish that goal or intention (while also failing to cause some other effect that was unintended but still somehow positive).

A bad question can be said to be so if it’s irrelevant, imprecise, or uses unclear language.

A bad question will obscure rather than reveal what a student knows now.

Further, a bad question will deter rather than encourage–or allow and promote–a student to create new knowledge.

A question might be thought of as bad if it, used in formative assessment, yields no useable (formal or informal) data that a teacher can use to revise planned instruction.

Thus asked, a bad question stops both the teacher and student cold with no clear and practical path forward.

A bad question intimidates, confuses (though not all confusion is bad), or somehow causes a jarring emotion that makes the students ability to use their cortex as effectively as they would in a calmer state.

It could be based on faulty premises, it could be loaded with cognitive biases, logical fallacies, or other irrational patterns of thinking.

It could be outside of the Zone of Proximal Development for the person it’s asked to (i.e., too easy or too difficult).

It may not be too difficult (in terms of content knowledge) but its language or syntax could be unnecessarily complex. The result here is that the student gets the question ‘wrong’ even though the ‘knew the content.’

As we’ve clarified, a question is simply a strategy for learning. A tool. You might, then, think of a ‘bad question’ like a ‘bad tool’: it simply doesn’t do what it’s intended to do.

In education, this usually means that it fails to facilitate/promote learning in the short-term and/or long-term for the student.

A good question–on a test, for example–will be efficient and precise relative to its purpose. If a specific academic standard the teacher wants to assess the student’s mastery of, the question will have to be written in a way that does exactly that: assesses their mastery of exactly that standard.

As we’ve discussed, it will not have ‘fat’–unnecessary words, overly complex vocabulary, or require other (unnecessary, unrelated, or still unlearned) knowledge or skills. Certainly, a question can have such language and require knowledge or skills unrelated to the specific standard being assessed provided that the teacher understands this–and thus understands that the student may get the question ‘wrong’ while potentially still mastering the standard.

The simplest criteria to evaluate the quality of a question, then, might be this: a good question helps students learn and learn how to learn in a sustainable, inquiry-based, student-led way. In its very best carnations, a bad question centers itself as a kind of academic bar for the student to leap over to prove themselves.

At its worst, a bad question halts the process of learning entirely through confusion, imprecision, and discouragement, misleading both the teacher and student as they make their way through the learning process. (See also What Is The Cognitive Load Theory?)

← The TeachThought Podcast Ep. 287 Examining Our Stories Of Teaching And Professional Growth 20 Questions To Clarify Your Teaching For 2023 →