Why Teachers Need Formative Assessment Too 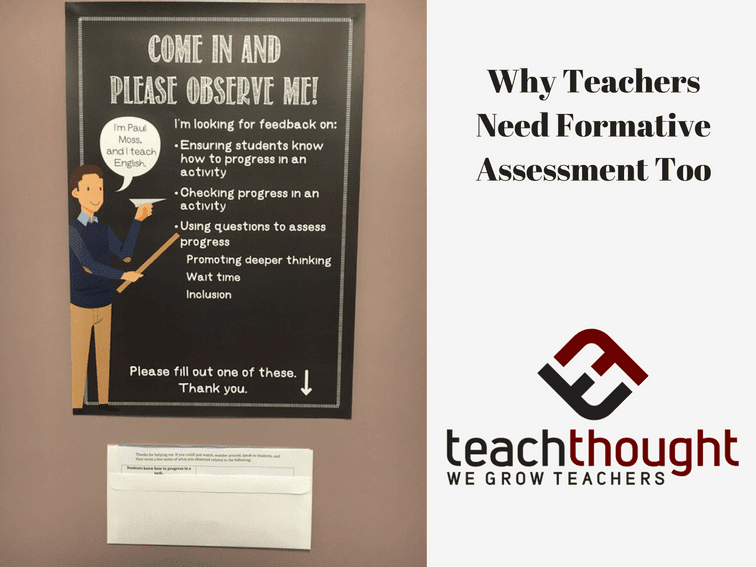 Why Teachers Need Formative Assessment Too

When you saw the image above, it may have surprised you in some way.

If you’re a teacher, you may have instantly wondered if you would, should, or could do it, and I bet if you’re an administrator you probably wished your staff already did.

Reactions I’ve had from it so far include ‘how brave’ to ‘how crazy’ to ‘that’s inspired’ to ‘what a brown nose’. But the hyperbolic reactions don’t surprise me, because being observed, no matter what anyone says or desires to be true, still remains a teacher’s most hated part of teaching, and having someone actively seek it out is …..well, just hyperbolically irregular.

For a long time I preferred to be left alone in my classroom. Here’s why:

But in reality, I was depriving myself of an enormous opportunity to become a better teacher, because having others observe my teaching is now giving me a springboard from which to grow very quickly. As you can see in the poster I stick up on my classroom door (but not for every lesson by the way), I am asking for feedback on areas that I believe are key to an effective lesson.

Having more frequent insights into that process acts like formative assessment for me. I am forever banging on about the importance of formative assessment for my students, and its ability to provide better snapshots of skills acquired, so subjecting myself to the same process only seems logical.  In fact, it would not only be ironic to my students to observe me shying away from such a process, but hypocritical.

I realize now that I actually have nothing to lose in the process of observation. If I am doing a good job, then the feedback will indicate so. If I am not doing a good job, the feedback means I can adjust accordingly, and do it quickly and now, rather than being told in a major observation. Yes it’s painful to hear criticism of your own teaching, but I’ll take that pain over the pain of being told in a formal observation any day.

In terms of the last two bullets above, my nerves of having someone else in the room are disappearing, as I’m not only getting used to the fact, but more significantly I’m also getting better at the skills I am focusing on–my targets–which results in better lessons. In fact, I am really proud when someone comes in now and the class is moving forward really nicely, and I have little fear that someone will take anything out of context – learning is happening, and it is undeniable.

Interestingly, asking someone to come into your room also creates a really different dynamic in the observer. You have asked for feedback on specific areas, and that is what will be focused on, and if your observer is from administration, the joy they will have in your initiative and the wisdom they will impart is well worth the bother. After all, there is nothing better for administration than to see their teachers wanting to improve.

So while working in isolation certainly may seem like an easier option compared to being observed, it is not an effective way to get better. I’ve learnt that the key to embracing observations is all in the approach. Seeing observations as allies rather than enemies is the first step in such a process.

Be brave, or crazy, or inspired, or whatever anyone wants to label it, but turn observations on their head, and know that by doing so it will make you a much much better teacher.

*this blog was originally published at TeachThought.com

← The TeachThought Podcast Ep. 65 Using Mindfulness And Meditation To Help Children Manage Stress And Be More Compassionate An Updated Guide To Questioning In The Classroom →