Why Are Schools So Bad At Preparing Students For Modern Jobs? 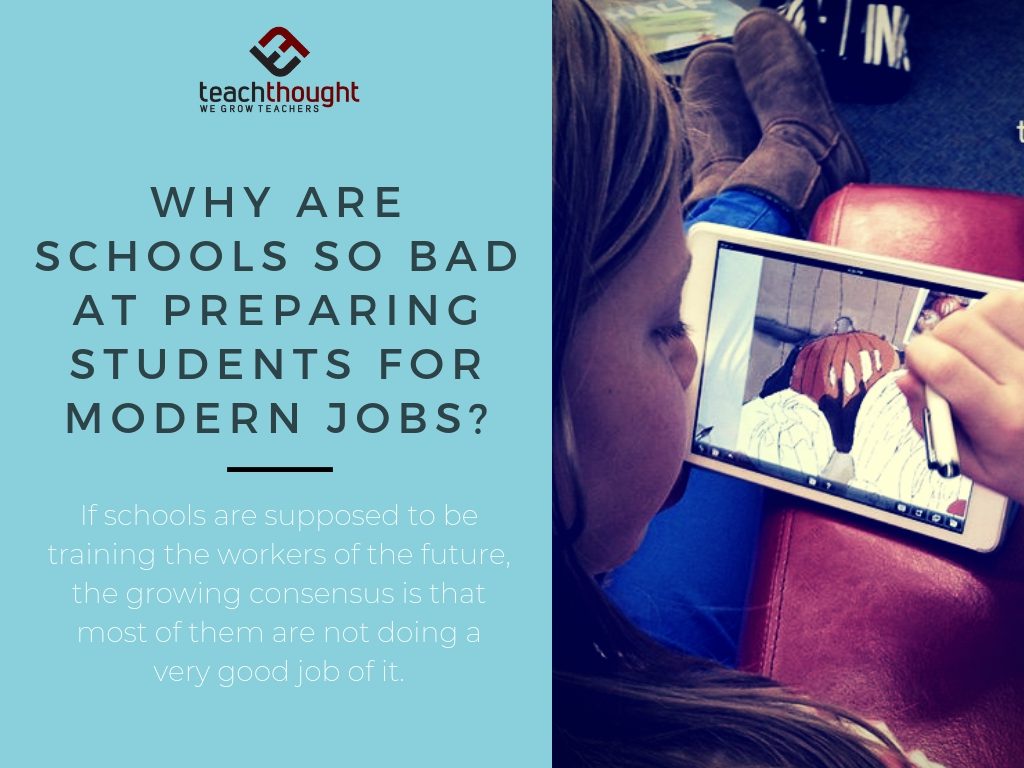 Why Are Schools So Bad At Preparing Students For Modern Jobs?

If schools are supposed to be training the workers of the future, the growing consensus is that most of them are not doing a very good job of it.

In a trend that seems long overdue, technology-based companies are increasingly turning inward to bridge the gap between the skills they need employees have and the skills they’re actually graduating from college with.

In 8 Critical Skills For A Modern Education, we offered one view of what ‘modern workplace’ skills might look like, and have argued many times that true ’21st-century learning’ should change what work looks like all together.

(Nevermind that, in our estimation anyway, the purpose of school is not job training.)

Still, companies (for now, anyway) need human workers with certain skills that, increasingly, they just don’t have. It’s nearly 2018, and the concept of 21st-century skills is more than two decades old now.

A 2016 World Economic Forum report describes a “Fourth Industrial Revolution’ and its effects:

“Disruptive changes to business models will have a profound impact on the employment landscape over the coming years. Many of the major drivers of transformation currently affecting global industries are expected to have a significant impact on jobs, ranging from significant job creation to job displacement, and from heightened labour productivity to widening skills gaps. In many industries and countries, the most in-demand occupations or specialties did not exist 10 or even five years ago, and the pace of change is set to accelerate.

By one popular estimate, 65% of children entering primary school today will ultimately end up working in completely new job types that don’t yet exist.1 In such a rapidly evolving employment landscape, the ability to anticipate and prepare for future skills requirements, job content and the aggregate effect on employment is increasingly critical for businesses, governments and individuals in order to fully seize the opportunities presented by these trends—and to mitigate undesirable outcomes.”

In ‘The Future of Jobs and Training,’ the Pew Research Center writes:

“Machines are eating humans’ jobs talents. And it’s not just about jobs that are repetitive and low-skill. Automation, robotics, algorithms and artificial intelligence (AI) in recent times have shown they can do equal or sometimes even better work than humans who are dermatologists, insurance claims adjusters, lawyers, seismic testers in oil fields, sports journalists and financial reporters, crew members on guided-missile destroyers, hiring managers, psychological testers, retail salespeople, and border patrol agents.”

Not Waiting Around For Colleges To Adapt

Terry Heick recently tweeted about the not-new idea that education needs to change not soon, but now.

Think about how much the world has changed in the last 15 years.

Now think how much education has changed in the last 15 years.

For a concrete example of the-world-is-changing-faster-than-education, we can turn to a recent Wired article, ‘Impatient With Colleges, Employers Design Their Own Courses,’ which describes how companies are already responding to skill deficits that exist in lieu of decades of imploring for ‘ 21st-century skills.’

“Tired of waiting, Microsoft, Linux and other employers have teamed up with edX, a collaboration started by Harvard and MIT to provide online education that is much easier than brick-and-mortar programs to keep up to date and to disseminate to vast numbers of students simultaneously.

The courses employers have been helping to create don’t just teach skills students need to work for Microsoft, Amazon or Google, like the highly specialized training classes that are longtime industry standards — Linux System Administration, for example, or Office 365 Fundamentals. Instead, the companies are working with edX and others to provide what they say are the educations that all of their employees require in common, including such abilities as critical thinking and collaboration.”

There are, of course, many potential questions, including:

Should schools train students for Apple and Amazon? Is that what school is for?

Does this kind of trend indicate that education needs ‘disrupting’ to keep up with rapid social change, or does it mean education itself should pivot and return to a humanities-and-literacy focused idea?

Is education even designed for and capable of this kind of change? If so, what’s stopping it? If not, what needs ‘updating’ so that it can?

Or should education resist this kind of occupational evolution, and if so how and at what risk?