The Problem With Most School Mission Statements

The Problem With Most School Mission Statements

Read your school mission statement, and tell me what you think.

Respond in the comments if you can. Tell me who it seems written by, and for. Well, first come up with some idea in your head what a school mission statement should do, then read yours and see what you think. Because from this vantage point, they’ve gotten out of hand.

I get what they’re there for—to publicly declare a school’s intentions. A vision. They reflect a brand, a philosophy about learning, and an approach. And increasingly, ambition.

A lot is asked of missions statements. They have to sell the school, please the superintendent, and rally the community. Only they read like inscriptions on national monuments or the elegies of fallen heroes.

Take the following statement, with the name removed so that we can consider the statement and not the school.

(Our mission) is to seek exceptionally promising students of all backgrounds from across the nation and around the world and to educate them, through mental discipline and social experience, to develop their intellectual, moral, civic, and creative capacities to the fullest. The aim of this education is the cultivation of citizens with a rich awareness of our heritage to lead and serve in every sphere of human activity.

What on earth–every sphere of human activity That’s not just ambitious, it’s delusional.

Isn’t the core of all learning self-knowledge—a learned modesty about scale and purpose and propriety? That we are all connected and hopelessly dependent on one another’s gifts and choices and humility?

Isn’t ‘work’ about working well with intimate knowledge and affection for one’s place?

…to develop their intellectual, moral, civic, and creative capacities to the fullest.

Imagine a restaurant whose mission is to ‘feed every person with food grown in a field with zero erosion loss and then prepared in a building with zero carbon footprint and cooked and portioned and arranged so as to be the exact amount of the specific protein and nutrient for every single person while never triggering a food allergy ever but while also offering those food that sometimes trigger food allergies because people love peanut butter?’

It’s impossible, right? Or, at best, so incredibly ambitious that it’s not close to sustainable for the people expected to provide and produce it?

So why do we allow the same in education? Yes, I know children are worth our very best efforts. That’s not the point. Why do we–year after year after decade–create goals and mission statements among the planets and stars, then insist on data and strategies grounded in research and reality?

And in doing so, ‘market’ ourselves wrong to the ‘public’ and set everyone up for an awkward sort of pseudo-success and perma-failure? 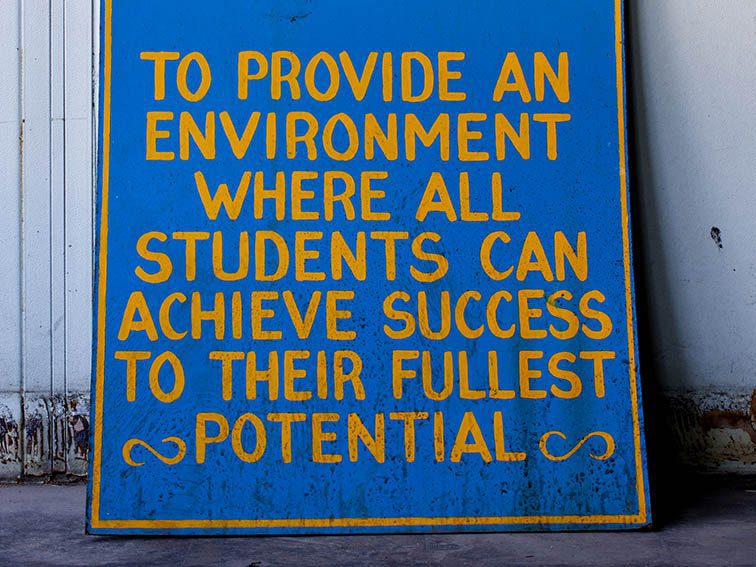 Does it happen? Do students who attend this school push themselves and every fiber of their being to new limits that will sustain them for the rest of their lives? What is it about education that encourages crazy talk?

No, you’re not. You try and it’s a noble goal as long as you’re okay with impossible goals that are well-intentioned but absurd.

There will not be a single child in the entire school that will be left behind.

Yes, there will be. You’ll try and everyone will do their best but this mission statement is literally impossible–but it sure feels good to try, right?

How about this one?

We will graduate students who are accomplished in the academic skills one would expect; at ease beyond their borders; truly fluent in a second language; good writers and speakers one and all; confident because they excel in a particular passion; artists no matter their field; practical in the ways of the world; emotionally unafraid and physically fit; humble about their gifts and generous of spirit; trustworthy; aware that their behavior makes a difference in our ecosystem; great leaders when they can be, good followers when they should be; on their way to well-chosen higher education; and, most importantly, architects of lives that transcend the ordinary.

This sounds interesting to me as an educator. It’s a great read. It’s humble in spots (great leaders when they can be), and philosophical in others (artists no matter their field). But whose goals are these? Where did they come from?

Can–or should–incredibly important and abstract goals be handed down from school committees? Not saying they shouldn’t–just asking. Seems iffy. The big issue here, however, isn’t arrogance, but precision. We’re missing the purpose of school and consequently the purpose of school mission statements.

A mission statement should act like a mirror, clarifying for everyone where the school is, and where it’s going. And for that to happen, it has to be dynamic and organic. Changing endlessly—responding to changing tones, values, and social needs.

Its tenets should be reflected in curriculum, assessment, and instruction, projects, technology, and learning artifacts.

It should reflect not the latest educational jargon, but the intellectual and cultural memory and will of the local place and people.

It should speak to them, and then change as they do. (And if they don’t, well, we’ve got a problem, yes?)

Ideally it’d be different for every student. At worst, they should be a common statement of mutual understanding.

The first mission statement from the beginning? It’s from Yale, and the second longer one from Avenues School.

I say get rid of them all and replace them with something that parents might say and children might believe in–or even say themselves. Play a running documentary on the walls of the school’s hallways that reflects the challenges and possibility in the local community, and the affection and natural curiosity and creativity of each and every student.

That reflects both local habits, place, and legacy—something that acts as both cultural memory, and hope for our shared future together.

That will tell anyone paying attention all they need to know.