How We Shifted From From Static Learning To Constructionist Learning 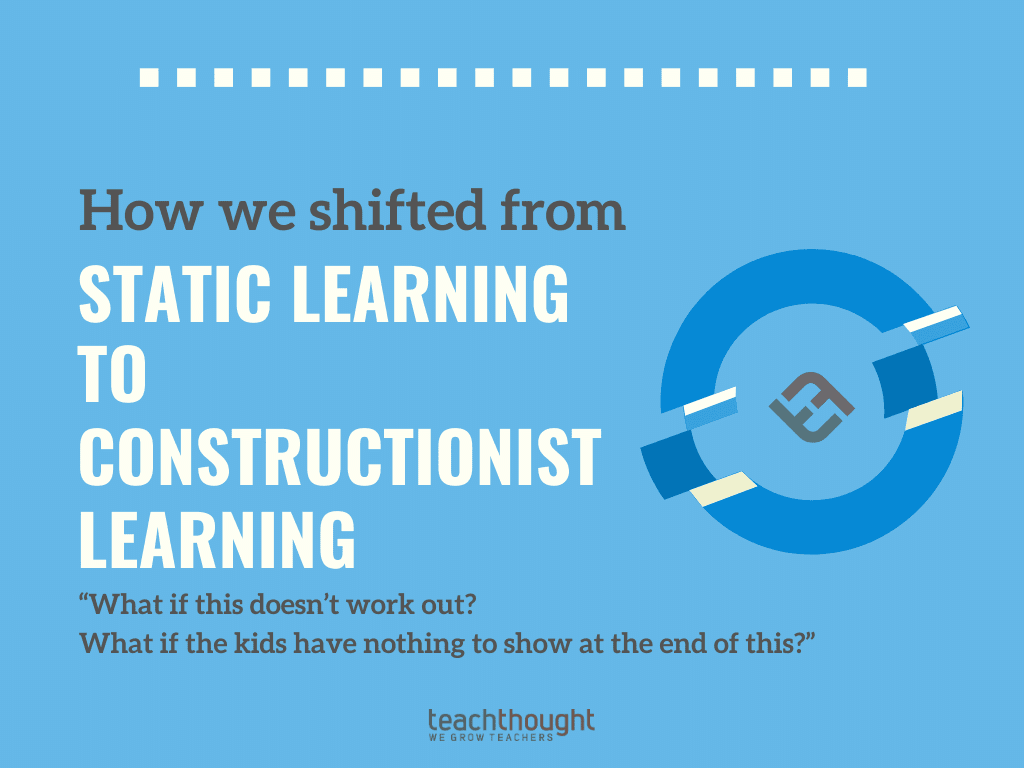 My colleague and I took a constructionist approach to teaching the FAME project. Along the way, our middle school students tinkered, failed, learned, and created. Here’s how we did it and the tools we used.

“What if this doesn’t work out? What if the kids have nothing to show at the end of this?”

These were two questions my colleague Paul asked when we began tinkering with how he taught the FAME Project in his 7th grade humanities class for the past 5 years. I’m not afraid of ambiguity or open-ended projects but I’m the Ed Tech Specialist and part of my work is living in those grey areas. It was understandable that Paul might be a little more concerned that things would work out. “They will absolutely have something to share,” I responded when expressing his trepidation “and if things aren’t fully working they will have a great opportunity to show their parents how their creations work.”

The FAME project is an annual month-long exploration of feudal Asia and medieval Europe that Paul had been running in his class in some form for the previous 25 years. For the past five, his students’ final project was a film festival complete with categories, ballots and final award ceremonies that took the better part of an afternoon to host. While the new seventh graders looked forward to their chance to film their own cinematic stories, in the Spring of 2018 Paul approached me to try something new, something fresh.

I’ve been the Educational Technology Specialist for 6 years and previously was a classroom teacher for 16 years. I have often worked with Paul to explore novel and engaging ways to use technology to enhance the teaching and learning in his class. He wasn’t a stranger to innovation so when he approached me to explore shaking up the FAME project I knew that I could suggest ideas that neither of us had tried before.

I am a builder and tinkerer at heart and from my very first years in the classroom I knew that I wanted kids to be building things with their hands. Doing so would make their learning and understanding visible. I’m a fan of Seymour Papert’s theory of “constructionism.” Built on Piaget’s theory of constructivism which suggests that students construct their own learning by reflecting on their personal experiences, constructionism contends that learners make sense of the world by creating mental and physical models. While constructionism is more often applied to science and mathematics classrooms, I believe it can span all subjects, especially social studies.

Paul’s interest in a collaborative project came at a synchronistic time for me. I had just brought the movie “Most Likely to Succeed” to my school and I had just been introduced to SAM Labs. The film explores a collaborative history and science constructionist project at High Tech High in San Diego. SAM Labs is a cutting-edge coding and electronic technology kit for teachers to bring engaging STEAM projects to their students. Inspired by the film, I realized that revamping the FAME Project with Paul was the perfect opportunity to combine social studies with  the hands-on technology of SAM Labs. This curriculum could allow students to more deeply make sense of the cultures they were going to be studying.

Early on Paul and I knew that we wanted this project to be driven by a ‘big question’ that would force students to think like historians. While previous years’ film projects allowed students to share what they had learned, the films also were only a kind of mirror to history, which didn’t always reflect deeper learning. Making a film about a historical figure like Genghis Khan didn’t necessarily require a synthesising of big ideas. We wanted to change that. “How do new ideas change the way people live?” became the lens for our middle schoolers to think about culture and the impacts new ideas have on culture.

How We Brought Constructionism Into Our Classroom

Our plan was this. Students would study one of four geographic areas (England, the Middle East, China or Japan) and become an expert in an area of culture such as religion, politics, or technology. After a two-week intensive study, they would pose a theory to answer the BIG question. The catch was that they had to show their ideas in a physical model using few words. Being succinct would force them to develop a well-thought conceptual understanding of their topic, not an easy task for most students.

In the months leading up to FAME, all the students had taken a ten-day programming class. They learned basic block coding and got to use the SAM Labs electronic kits. They built prototypes with motors, buttons, light sensors, servos, buzzers and a number of other bluetooth enabled devices. These were activated through coding using Workbench (which you can find here), an online programming canvas. We let them know they were learning to use these tools now so they would be ready to build their models later in the year. We didn’t want to overload them by teaching them both the content of social studies in FAME and the basics of computer programming and electronics. Laying the groundwork ahead of time was crucial.

Once the students had developed their theories they got two weeks to design, test and build their models. The classroom energy was high in those weeks! Kids used dry erase tables to sketch their thinking and talk through technical issues. They used cardboard, wire, hotglue, tape and paper to build rough drafts which they began connecting with a variety of the SAM Labs devices. Each group was required to have at least one moving part in their display which opened up a variety of possibilities with gears, levers and pulleys. One group of students used buttons, lights, servo motors and sliders to convey how power rose and fell through the centuries before and after the Magna Carta was created by King John in 1215.

The Shift From Static Learning To Constructionist Learning

As is the case of any project of this scale and complexity the days before the final gallery showing to family and friends was a mad dash of problem solving, frustration and even some tears. Paul’s initial question about effectiveness continued to echo in my ears as we moved into the final stretch. There was a very real chance that some projects wouldn’t be finished. There was a potential that many of the electronic and coded components wouldn’t work.

And, while all the projects were supposed to be hung neatly on the wall, completely finished and fully functioning, on the day of the exhibition there were still quite a few students sitting on the floor with their parents, or with their projects propped up against a table, while they tinkered, fixed small problems, re-coded or added tape to hold pieces together. In truth, it was beautiful!

This was learning in action, and the parents got to see it happening in real time. In fact it was the kind of experience that I had hoped would happen right from Paul’s question asking if we could pull it off.

This wasn’t static learning. This was dynamic constructionist learning that required some fiddling, some negotiating and often, lots of explaining.

Rob van Nood has been the Educational Technology Specialist at Catlin Gabel School in Portland Oregon since 2013. Previously, he was a classroom teacher for 16 years. Rob has always been passionate about developing learning spaces and experiences where kids can ask questions about themselves and the world and where there are lots of opportunities to make their learning visible. Twitter: @robvannood

Paul Monheimer has 30 years of teaching experience in every grade K-12. From HyperCard to SAMLabs, Paul has been involved in integrating new tools into existing curriculum. Paul is a two-time Fulbright Award recipient, having been both an Exchange Teacher and a Distinguished Award in Teaching grantee. Paul is currently retired and living in Central Oregon Twitter: @leftysdad

← The TeachThought Podcast Ep. 197 Are We Teaching Reading Wrong By Omitting Knowledge? 20 Examples Of Project-Based Learning →