Don’t Teach Beliefs. Instead, Help Students Understand Where They Come From 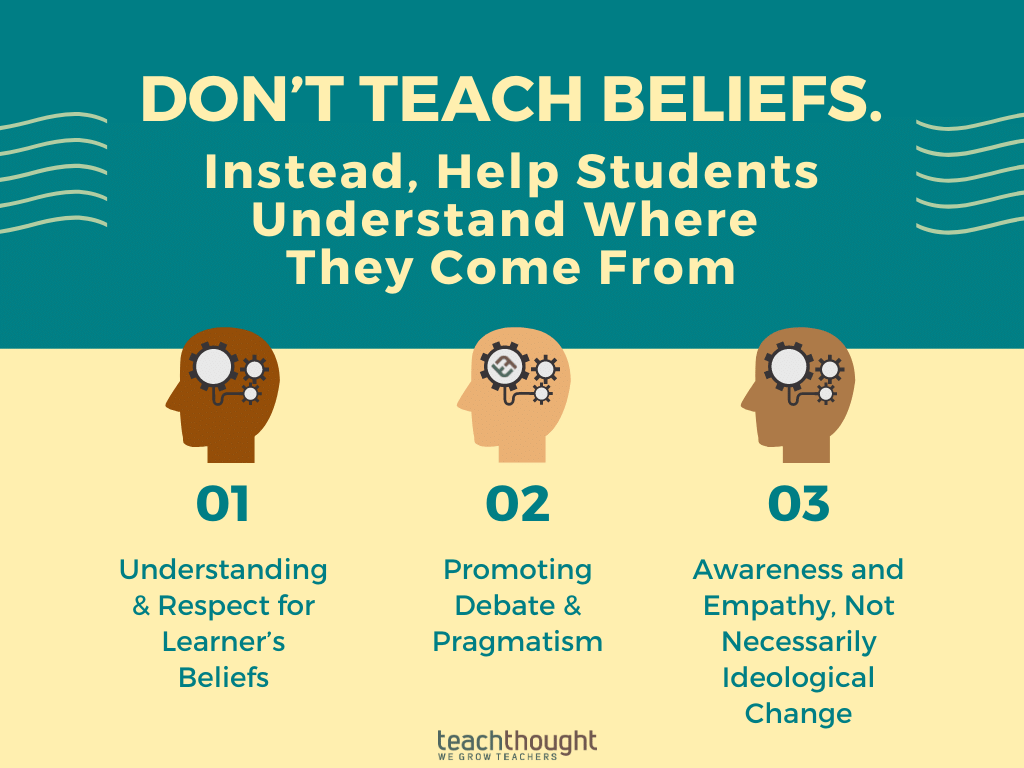 Don’t Teach Beliefs. Instead, Help Students Understand Where They Come From

This post has been updated from its original publication in 2017

The fundamental purpose of higher education is for students to be able to self-educate after leaving post-secondary institutions, applying such in both a personal and professional context. However, to accomplish this requires defining the characteristics of the individuals being taught.

However, to accomplish this requires defining the characteristics of the individuals being taught. According to the National Center for Education Statistics, in the Fall of 2015, full-time undergraduate students under 25 years of age made up 75 percent of enrollments in two-year public colleges.

This calls for a discussion on the degree of success we have in promoting objectivity to this demographic. For instance, a government instructor may ask students to debate the constitutionality as well as the social aspects of the Supreme Court decision, Obergefell v. Hodges, giving federal protection to same-sex marriage, in order to contextualize the 14th Amendment.

Considering how this presents contemporary issues that are rooted in political and religious virtues, one has to now address the student’s perhaps inherited views, in an ethical manner.

The objective should be to facilitate a discussion that results in a more comprehensive understanding of both sides of controversial topics, which will ultimately allow students to arrive at independent conclusions. Although educators should advocate equality in their instruction where applicable, their role is not to dictate any student’s personal beliefs, as staying true to principles of equality means the learner has a right their own ideals.

The instructor must present points that appeal to both those who support and those who would dissent on these issues.

Perhaps an instructor would note that the expanding role of government is at times necessary to enhance equality in society. One could cite the legal precedent set during the evolution of the concept of federalism during Reconstruction in the 19th century, which resulted in the ratification of the 14th Amendment. Contemporary legal and social aspects could also be much needed social security benefits from a deceased long-term spouse, healthcare coverage, to a wide spectrum of other legalities related to same-sex marriages.

The inevitable fact is that perspectives on such topics such as same-sex marriage are influenced by religious views. It is vital to remember the instructor’s position on any contemporary issue should be comparable to the objective approach, which is asked of the student, as teaching students to be pragmatic and unbiased is never accomplished through invalidating their own beliefs.

An instructor may explain the complexity of this case is in promoting equality that is also found in the religious freedoms affirmed through one’s 1st Amendment rights who would dissent on the central issue. Stated in the opinion of the court, is the right to voice and adhere to religious beliefs that oppose this decision, which are constitutionally protected. The court also called for debate on how society may reconcile, while respecting, these opposing ideologies.

While one hopes the learner will see the value in these expanded civil liberties given to same-sex couples, they will also realize that comparable protections allow for their own liberties.

In making points such as this to the students, an instructor is essentially giving their world back to the learner, awarding them influence they have always held, but may have not realized. This highlights the power of the learner, whether it be through advocating change or promoting the status quo, as both are necessary at different times. While we should address student arguments that are factually incorrect, discounting a student’s religious or political beliefs in a classroom setting does not create a nurturing environment that allows for student growth.

As the facilitator acknowledges the diverse perspectives of the students, they will not only be more apt to engage, but to see the credibility in new ideas offered by their peers. Thus, the strategy of teaching with impartiality through creating understanding is accomplished throughout the entirety of the process of facilitating the discussion. This is simply done through allowing students to voice those, perhaps now negated, previously one-sided ideas to their peers.

This could prove to be enlightening to individuals who may lack those conceptualizations of society.

Lastly, all topics should be presented with information derived from research when possible. For instance, in 2015 Pew Research analyzed the changing views on same-sex marriage of Christians, showing that 62 percent of what they refer to as ‘white mainline’ Protestants are not opposed to same-sex marriage as of that date. Such work would be an asset that combines complementary evidence and opinions that could be used by an instructor to illustrate the pragmatic changes to social norms within religious groups.

One should keep in mind that the goal is to prepare students to make objective inferences that will apply to the real world, which they will presumably one day influence.  Learners that fall into the demographic which is under 25 years old may have experience that has been limited primarily to theories and summative evaluations. An educator should facilitate a discussion that leads one see the merits of both sides of opposing concepts.

Ultimately, this approach will give them the tools needed to think critically when presented with complex issues outside of the classroom, and develop healthy and rational beliefs in the process.

Dale Schlundt holds a Master’s Degree in Adult Education with a concentration in American History from the University of Texas at San Antonio. Dale has taught at Northwest Vista College, Our Lady of the Lake University, and is currently a faculty member at Palo Alto College. He is co-founder of Palo Alto College’s new program for individuals with intellectual disabilities, Project Access, and a co-chair for the Texas Regional Alignment Network. He can be reached at daleschlundt@gmail.com