Critical Thinking Is A Mindset 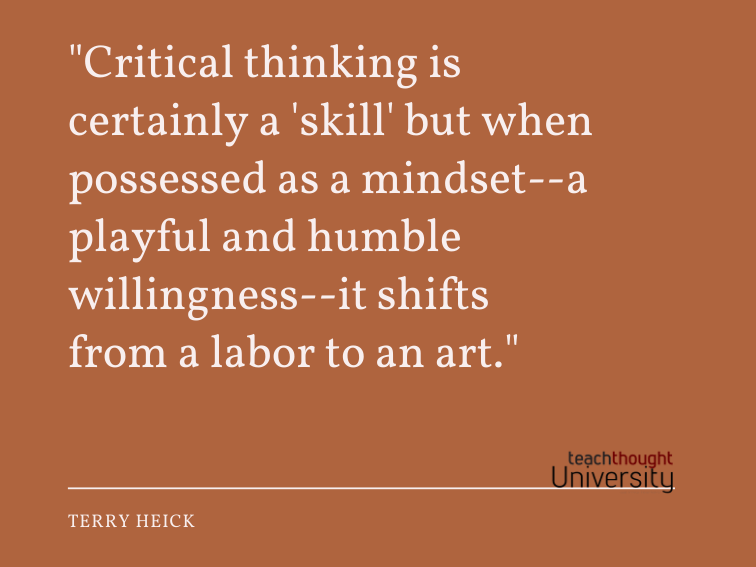 Critical Thinking Is A Mindset

Every few months, I see an article making the rounds that critical thinking isn’t a skill and therefore can’t be taught.

And because it’s also difficult to measure and modern public education is driven by measurement, as an idea it kind of sits in the corner, aloof and mute.

Often, these articles are in regards to a conversation or research related to Daniel Willingham, a psychologist at the University of Virginia who is often associated with this kind of claim. Even though my instinct is to disagree, Willingham, of course, knows more about this topic than I do so my goal here is not to dispute that claim.

I do, however, think it’s possible that we may misunderstand what it means to think critically, which I’ve written about (though not often or well enough) many times. In The Definition Of Critical Thinking, for example, I said:

Critical thinking is among the first causes for change (personal and social) but is a pariah in schools –for no other reason than it conditions the mind to suspect the form and function of everything it sees, including your classroom and everything being taught in it. Of course, critical thinking without knowledge is embarrassingly idle, like a farmer without a field. They need each other—thought and knowledge. They can also disappear into one another as they work. Once we’ve established that—that they’re separate, capable of merging, and need one another—we can get at the marrow and fear of this whole thing.

After watching the effect of disinformation on recent national and global events, it has occurred to me that critical thinking is less of a skill and more of a willingness or habit. In short, critical thinking is a mindset. As I’ve said before about reading–here, for example, in Why Students Should Read–is that while it’s important that students can read, it’s more important that they do read.

In this way, critical thinking has to be a mindset.

Critical Thinking Is A State Of Mind

Arstechnica (somewhat) recently wrote about how fixed mindsets hurt thinking in discussing Why Can Only 24% Solve Bayesian Reasoning Problems in Natural Frequencies: Frequency Phobia in Spite of Probability Blindness.

Just as math can be said to be a kind of language and science is a way of thinking, critical thinking (while also being a ‘way’ of thinking) is first a state of mind–a willingness to do so both preceded and proceeded by a motley collection of presuppositions and premises and tendencies and cognitive defaults and even eventually personality traits that manifest when you read a book or have a discussion or skim a news headline or research an idea.

Critical thinking is certainly a ‘skill’ but when possessed as a mindset–a playful and humble willingness–it shifts from a labor to an art. It asks, ‘Is this true? By what standard? Who would disagree and why? What is the history of this issue or topic? What am I missing? What kinds of knowledge am I missing to understand this more closely and how can I acquire them?

Critical thinking as a skill attempts to understand.

Critical thinking as a mindset reads and listens as a witness and is haunted by what it doesn’t know and cannot understand and then, from that starting point, starts the process of reason–of being and becoming rational.

Critical thinking isn’t emotional because its identity isn’t wrapped up in an opinion or ‘belief’ and being ‘wrong’ is valuable because it gets us closer to being ‘right.’

Critical thinking is nearly impossible to apply without some kind of bias but, as a mindset, it watches for its own biases (see the definition confirmation bias, for example) as a watchman might watch for strangers.

And, as a mindset, it’s okay with the labor of it all because it values reason more than favor with crowds; it favors accuracy over perceived accuracy and encounters any circumstance wide-eyed and humble and curious, seeking to understand and scared to death of bias and incomplete knowledge and logical fallacies and other cognitive misbehaviors that might lead it astray.

See? Critical thinking is a skill but it’s also a tendency and trait and light-making tool in darkness for many becomes a mindset–both a way of knowing and a way of being.

And this is all part of way teaching it as a skill–much like teach students how to read rather than why–is part of our challenge in education. As usual, we are asking the wrong questions.

← What Is Google Jamboard? A Tool For Visual Collaboration Shifting Teaching From What They Might Become To Who They Are Today →