The Best Source Of Education Research Is Your Classroom 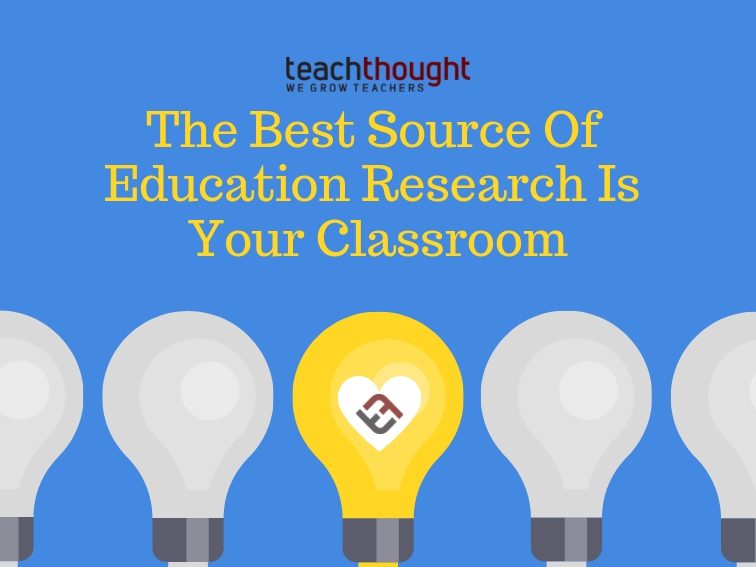 Looking for the the best source of education research?

The one with authentic data, practical studies, and a wealth of participants and possibilities?

How about your own classroom?

There is, increasingly, pressure to be research-based and data-based. Or ‘grounded in research’ and guided by ‘data-based decision-making.

On paper, neither of these admonishments are incorrect, but as I said in ‘It’s Not About The Thinking,’ the soundness of an idea depends on the quality of its effect.

‘I love the idea of mobile learning, so I attach positive feelings to it that can lead me to cognitive distortions downstream, where I oversimplify its function, or catastrophize our continued misunderstanding of its potential in education. I champion it, but the “it” (mobile learning, in this case) is merely an idea. The it + context is different. This is chemistry.

Think of it as pattern: Idea–>Integration–>Effect.

The idea alone is useful only as a matter of vision or artistry. As an academic or intellectual exercise. As a matter of playful dialogue or good old-fashioned bench racing.

The integration is a matter of design and engineering (designer and engineer being two minds of a teacher).

There’s a lesson here for all of the data champions out there.

Several years ago, I remember creating a unit and submitting it for ‘approval’ by the higher ups.

Again, that’s not a terrible idea–experienced administrators and informed district officials analyzing planned instruction, providing useful feedback, strengthening teaching practices and tightening workflow; teacher capacity is improved while leaders lead and students reap the benefits. In application, it was a train-wreck. I’d submit a unit, be asked if I’d collaborated with other teachers on the creation of the unit, told where the unit failed to meet the ‘non-negotiable’ form (as opposed to content or quality), and, invariably, asked where the research was to support nearly every design-choice I’d made.

Even if those questions were legitimate and entirely reasonable (which I’d argue strongly that they’re not but that’s another post because they kind of art legitimate and reasonable), the effect of those questions was problematic. I’d have to rush to either find research to support the ‘decisions’ and data to support the research and research that says the data was legit, and so on, or I could read research and then identify the strategies and then shoe-horn them into the lesson, which itself was already backwards planned from a standard rather than a strategy or data.

And then, after much Sunday-night scrambling, I’d ‘resubmit’ my plans for ‘approval.’ Not only was this an enormous amount of work for the administrator, but it’d often leave me up until late at night, or early to school the next day to revise my lessons (and then my unit because the lesson had changed).

And none of this diddly-squat to improve the lives of students.

The idea (of approving all lessons and units in realish-time) was fine; the effect was terrible.

So, let’s back up to the idea research at large.

In ‘6 Questions Hattie Didn’t Ask But Could Have,‘ I wondered what it meant to say something ‘works’ in education and I pushed that idea further in ‘What Works In Education And How Do We Know?”

In short, while research helps us understand what works and what doesn’t and why, what it means to ‘work’ is vague and how well the results of that research apply to your classroom and the minds of students in it is, at best, uncertain. Using ideas for which there is data to suggest they might work makes more sense than the opposite, but implying data and research over people and effect is a kind of blindness inherent in business, industry, and recently, education, too.

There is significant transfer in the idea of being research-based. It is implied that since something ‘worked’ in the scope of a study or any aggregation of studies, it will ‘work’ for your students. That it will ‘transfer.’ Being research-based isn’t the goal, but a strategy to reach a goal. The goal has to be to change the lives of students and the health and membership of their communities. Otherwise, we’re just training tiny hominids to master academic content.

So, the whole point I guess is this: Research just means, in part, to verify something works under a kind of scrutiny. Data just means the quantification of something, presumably of some kind of quality.

So why can’t we use schools and classrooms as foundations to research? To test theories? To experiment and be playful and push boundaries? The transfer from a study in 2012 at some university about the quality of a specific reading strategy to your classroom is significant. So reduce that transfer. Take the ideas that pervade academic research and neurology and the work of Hattie and Marzano and Stiggins and so many others–take those ideas, then test them yourself.

(And do not tell me that a ‘data-team’ doesn’t this or my eye will twitch and I won’t be able to see and the room will kind of shake and that’s unsettling.)

If your school and your classroom (and curriculum and assessment and all the other bits and pieces) are designed to function as research laboratories–and to produce laboratory-quality data–then everything changes from push to pull.

Research is, at best, predictive for transfer. Put another way, research says ‘This worked this way, and should likely work in a similar way for you because we tested it.”

The best source for data is the students in front of you, because in the end, that’s the only data that matters.