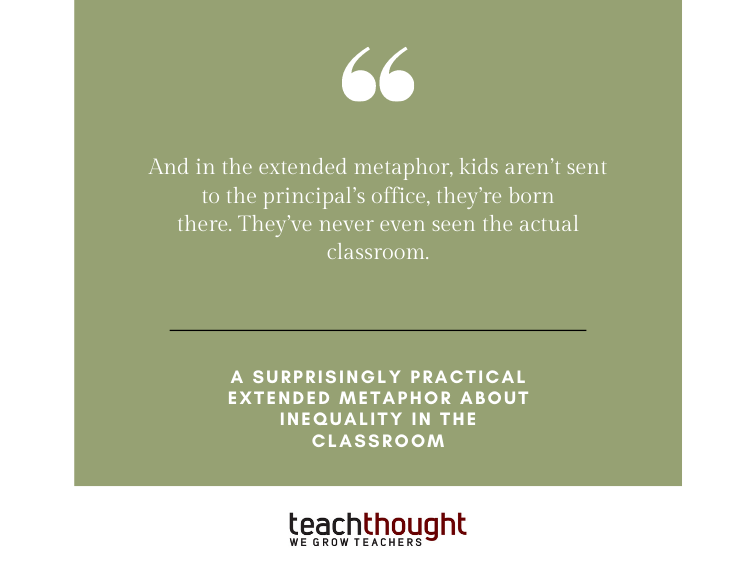 So as a middle school teacher for about 25 years, I’ve learned a few tricks. One of them is that if the kids aren’t engaged in what you’re working on, you’re wasting your time.

Another is that I’m willing to do almost anything to engage them.

One of the ways I do this is by making up games, like a lot of teachers do, and because I’m an English teacher, they’re often designed so kids can get practice on basic grammatical skills. And maybe we’ll find there’s more to playing–and ‘winning’–the game than acquiring skills.

Kids are allowed to choose their own teams, usually made up of two-three kids. The games are generally pretty simple: to think of one example, I’ll flash a sentence that needs some grammatical improvement—say, where do you add punctuation to fix a run-on sentence—and the first team to answer correctly gets a point.

So, the first sentence gets posted. Team 1 wins the point, followed by another team winning the next point. In the next few rounds, Team 1 wins most of the points, with a few other teams (Teams 2, 3, and 4) each getting on the board. Team 1 is in the lead, but just by a little bit. Team 5, however, hasn’t won a point yet. They’re last.

The game progresses, and Team 1 pulls away, absolutely destroying the competition. The middle teams get a few wins here and there, but the ones at the bottom have few. Team 5 still has none.

Now, why is Team 1 winning so much? Some information:

One of Team 1’s members is just really, really good with semicolons, which is a big help when you’re trying to fix run-ons. They don’t know why; it wasn’t anything they worked for, they just have it.

The second team member on Team 1 has a kind of vague understanding of how to fix run-ons, but defers to their teammate who’s really good at it, because it pretty much guarantees a win each time.

The third member of Team 1 doesn’t even know what a semicolon is and is only on this team because they’re friends with the other kids on the team, so they always get chosen by them for group activities. Left to their own devices, they wouldn’t earn any points for their team but they’re still on the team that’s winning. So why is Team 5 losing so much?

One member of the team actually has a pretty good grasp of how to fix run-ons, but isn’t as quick in calling out the right answers as the kid on Team 1.

Another team member doesn’t have a great grasp of them.

So, the game progresses.

Team 1 pulls further and further ahead. It took awhile for it to happen, but it’s slowly becoming a rout.

Several of the other teams get wins occasionally, but are still losing to Team 1.

Team 5 falls further and further back.

Now, any teacher will tell you what will happen with Team 5 around this time. They’ll become less and less interested in the game, and try less and less. Why bother when you can’t win anyway?

More time passes. Team 1 pulls further ahead. Team 5 falls further behind. And again, as any teacher could predict, Team 5’s lack of interest transitions to misbehavior and disruption. This game sucks. It’s stupid.

Now, bear with me as I extend this metaphor much further. Let’s say that this game goes on so long that the team members grow into adults, then have kids of their own, who become members of their team.

As far as the children on Team 1 know, their team has always been in first place. Always the best at this. These children didn’t do anything themselves to earn this, and in fact, some of them aren’t very good at fixing run-on sentences, but their team is so far ahead that it doesn’t matter. They would have to suddenly start losing many, many games in a row before there was any threat of them not being in first place.

Team 5’s kids, however, were born onto a team that was behind. Not only have they never been on a winning team, they’ve only been on a team that’s been losing since before they were born. Several of these kids are actually really good at fixing run-ons, but they’d have to win over and over for an incredibly long time before even coming close to pulling themselves out of last place. There would be no room for error for this to happen; everything would have to go perfectly.

By the time the kids on Team 5 have kids of their own—the grandchildren of the original team members—they’re so far behind that they don’t even see the point in learning the game. This game isn’t for them. It’s pointless to even play. So they make up their own game that has nothing to do with the original.

Team 1’s descendants, their kids and grandkids, can’t believe this. They can’t believe the teacher tolerates Team 5 leaving the game and making their own. This game’s fun—it’s fun to win, and a loss or two here and there is no big deal. Amongst themselves, Team 1 talks about how stupid Team 5’s members are. They even develop ugly nicknames and slang that they use to describe Team 5, sometimes just amongst themselves, but eventually, even out loud.

Let’s fast forward even further. Say, a few hundred years or so. Team 5’s members are in the furthest corner of the room.

Team 1 doesn’t even really try anymore, but they’re still in first. The kids born into Team 1 know not to speak to Team 5’s members. The names Team 1 uses to talk about Team 5–the nicknames and the slang–are all these kids know, as their actual names have long been forgotten, or never learned in the first place. Team 1 is uncomfortable with Team 5’s behavior, and wonders why they won’t just play the game like everyone else.

But wait: didn’t Team 1 deserve to be the winning team from the beginning of the game? After all, one of their team members had real talent in this skill. Well, okay; that team member was good at this game, for sure, but by their own admission, it was by dumb luck. Did that team member do anything to earn his talent other than being born with it? Also, is knowing how to fix run-on sentences the only way to be a good writer? And that’s the larger goal of the game: to become better at writing.  And think of all the other interesting and important things they could be working on if they hadn’t gotten stuck in this game.

And what about the other members of Team 1, who weren’t very good at the game, but were on the winning team through sheer luck, as were their children, and their children’s children?

Where’s the teacher in all this? Well, since most teachers choose their profession because they want to help kids, in the most literal version of the above analogy (in which the game goes on for just a few class periods), they’d likely redistribute the teams after a class or two, or try to help Team 5 with the skill outside of game time, as the idea is for them to learn to apply the skill, not simply to have winners and losers (because the teacher sees the point as being helping everyone to get good at using semicolons so they can use them successfully in their writing).

Also, in the more-extended metaphor, when Team 1 starts using nicknames for Team 5, the teacher cuts it off; not okay in their classroom. So while the kids don’t all necessarily love each other, they know that using that kind of language is not going to fly.

There’s another classroom a few doors down that’s playing the same game, with an identical situation, players, and scenario. However, when Team 1 began using some nicknames for Team 5 out loud, the teacher doesn’t intercede. Or perhaps they don’t hear them? Either way, this classroom becomes a place where it’s okay for kids to say deeply unkind, even mean, things to each other.

This teacher also lets the game continue indefinitely and doesn’t really recognize how it’s slowly getting out of control. When Team 5 starts becoming disruptive, this teacher starts sending those members of the team not just to the corner of the classroom, far away from the other teams, but into the hall. When even that doesn’t stop the disruption–the kids keep coming to the door to see what’s going on or to try to get the attention of the other kids–they get sent to the principal’s office.

How would either of these types of school affect the neighborhood around it? The larger community?

How would others perceive their school and its students?

How far do we care to extend this metaphor?