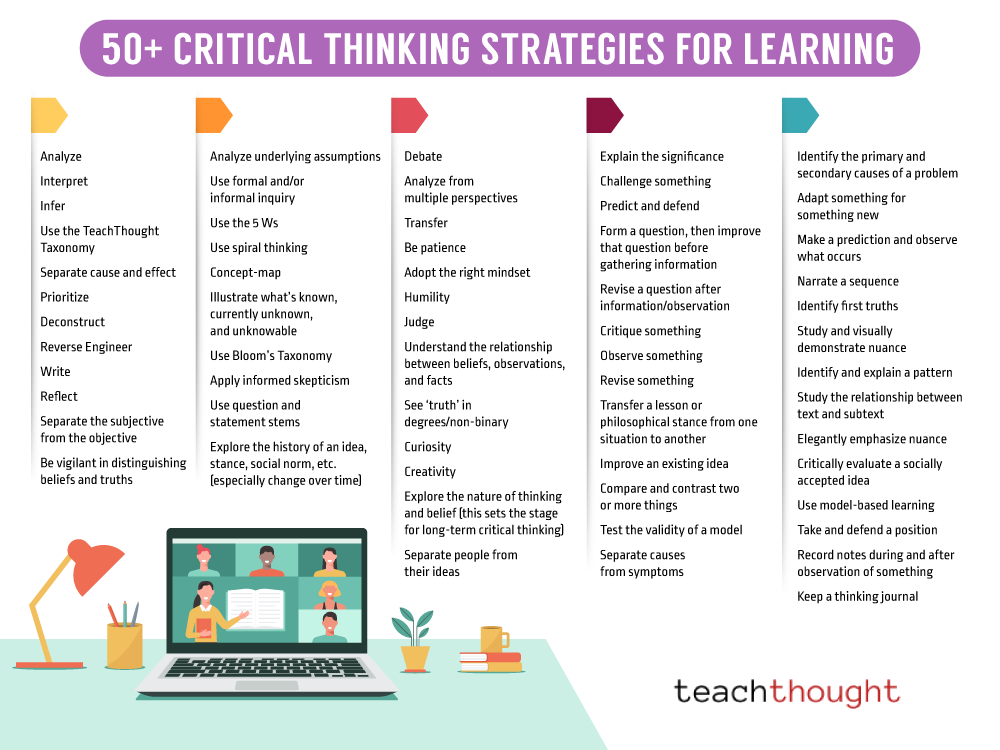 Critical thinking is the ongoing application of unbiased, accurate, and ‘good-faith’ analysis, interpretation, contextualizing, and synthesizing multiple data sources and cognitive perspectives in pursuit of understanding.

What are the 7 critical thinking strategies? Someone emailed me recently asking that question and I immediately wondered how many more than seven there were. 27? 77?

This is a post that’s going to have to be updated over time because do define, clarify, offer tips for and examples of each would be a short book.

But I did create a graphic and list many dozen to start with below (60 for now). I’ve also started adding some thinking for each but, as I mentioned, this will take time because it’s such an ambitious list (kind of like the Types of Questions post I did recently.) So, on with the list.

One of the more basic critical thinking strategies is ‘analysis’: Identify the parts and see the relationships between those parts and how they contribute to the whole.

Explain the significance or meaning of a ‘thing’ in a specific content or to a specific audience. Similar to ‘translate’ but (generally) with more cognitive demand.

Draw a reasonable conclusion based on the best available data. This critical thinking strategy is useful almost anywhere–from reading to playing a game to solving a problem in the real-world.

4. Use the Heick Domains Of Cognition Taxonomy

In fact, many of these strategies are built-in to the taxonomy.

5. Separate cause and effect

And concept map it–and maybe even consider prior causes to the most immediate causes and predict future possible effects. For example, if you’re considering an effect (e.g., pollution), you might see one cause being a new industrial factory built near a river or runoff. But you might also consider what enabled or ’caused’ that factory to be built–a zoning change or tax break given by the local government, for example.

Prioritizing is an executive neurological function that demands knowledge to then apply critical thinking to or on.

And narrate or annotate the deconstruction. Deconstruct a skyscraper or a cultural movement or school or app. This is somewhere between analysis and reverse engineering.

Writing (well) is one of the most cognitively demanding things students commonly do. It’s also a wonderful strategy to promote critical thinking–a kind of vehicle to help it develop. Certainly one can write without thinking critically or think critically without writing but when they work together–in the form of a thinking journal, for example–the effects can be compelling.

Observe and reflect is basic pattern for thought itself. The nature of the reflection, of course, determines if it’s actual a strategy for critical thinking but it’s certainly a worthy addition to this list.

11. Separate the subjective from the objective

And fact from opinion.

12. Be vigilant in distinguishing beliefs and facts or truths

To be able to think critically requires

Dewey described critical thinking as ‘reflective thinking’ (see #10)–the “active, persistent and careful consideration of any belief or supposed form of knowledge in the light of the grounds that support it, and the further conclusions to which it tends.” (Dewey 1910: 6; 1933: 9) It’s clear that to be able to consistently do this requires one to separate beliefs (which are personal and fluid) and knowledge (which is more universal and less fluid–though the depth and nature of knowledge and understanding can change over time).

This is somewhere between analysis and concept mapping, but seeing the relationship between things–ideas, trends, opportunities, problems–is not only useful as a strategy but is how the brain learns: by making connections.

14. Use formal and/or informal inquiry

A flexible strategy for inquiry and thought, the 5 Ws provides a kind of starting point for ongoing thought: who, what, where, why, and when.

This is part analysis, part epistemology.

21. Use question and statement stems

22. Explore the history of an idea, stance, social norm, etc.

Between beliefs, observations, and facts, for example.

Similar to inquiry but more a cause of inquiry than a strategy itself. Maybe. Kind of.

35. Explore the nature of thinking and belief

This sets the stage for long-term critical thinking.

36. Separate people from their ideas

This isn’t necessarily a pure critical thinking strategy but it can reduce bias and encourage rationality and objective analysis.

37. Making some abstract concrete or something concrete abstract

40. Form a question, then improve that question before gathering information

41. Revise a question after information/observation

45. Transfer a lesson or philosophical stance from one situation to another

A lesson from nature to the design of a tool or solution to a problem.

47. Test the validity of a model

Or even create a basic mathematical model for predicting something–stocks, real-world probabilities, etc.

A new function or audience or application, for example.

51. Analyze the role of social norms on ‘truth’

Or even the nature of ‘truth’ itself.

55. Identify and explain a pattern

56. Study the relationship between text and subtext

Or explicit and implicit.

57. Elegantly emphasize the nuance of something

I’ll provide a model for this soon but I’ve been using it with students for years.

60. Take and defend a position

Similar to debate but it can be one-sided, in writing, on a podcast, or even concept-mapped. It’s a simple strategy: specify a ‘stance’ and defend it with the best possible data and unbiased thinking

← What Are The Kinds Of Questions That Help Students See Themselves As Learners? The TeachThought Podcast Ep. 252 A Teacher's Voice: Reflecting On The 2020-21 School Year →