20 Questions To Clarify Your Teaching For 2023 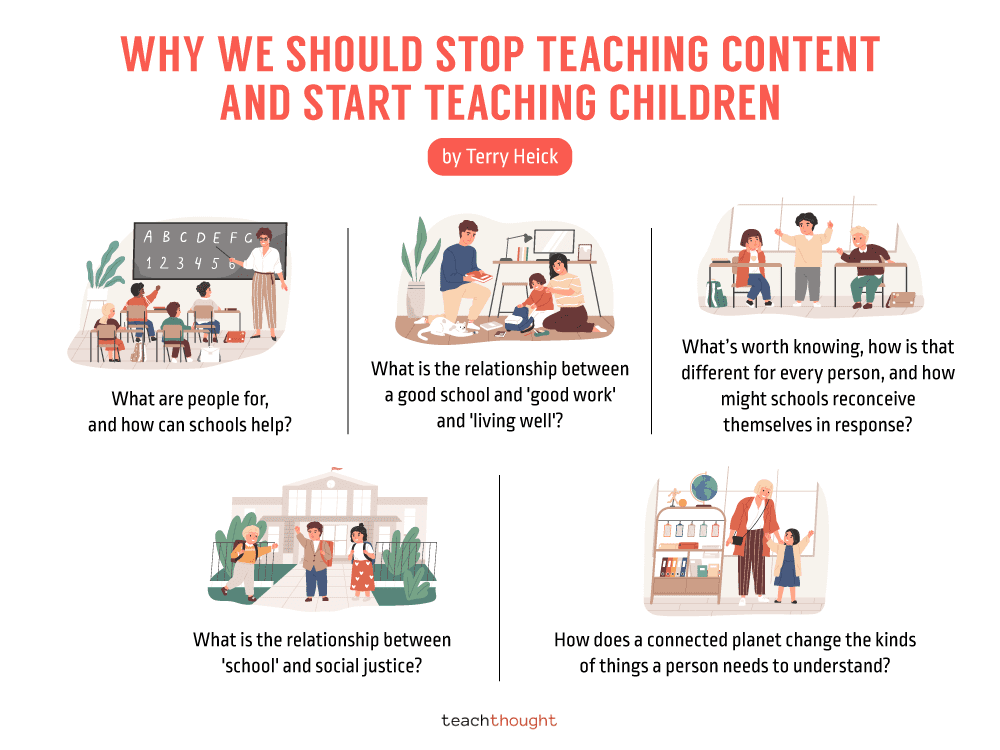 How Can You Improve As A Teacher This School Year?

Ed note: I wrote this in 2014 and have updated it several times since then, most recently in the summer of 2022.

Who knows where education is going, but it’s not impossible to come up with some questions that might guide that evolution.

Traditional questions that teachers and administrators face exist–and will for the foreseeable future: How can we ‘move students’ from this performance level to that? How can we get every student to read on grade level? What can we do to improve parental communication? How can we motivate students? How should I manage my classroom?

But–fingers crossed–this is the kind of training you get in your school staff meeting, district-mandated PD, and Monday morning emails.

I thought then it’d make sense to look at the new kinds of questions education faces–questions that can either underscore or erode the function of a school in a given community. So here is one person’s take (mine). As learning trends indicate a kind of temporary pattern, we may be able to trace the arc of what was to wonder what might be in the immediate future.

1. What is the relationship between school and a better world?

Put another way, how can I help students develop their own questions to make their part of the world–and their life–better in and of itself, regardless of academic ‘achievement.’ How can I get students to ask better questions–on their own, outside of my classroom?

The fact some may consider this a ‘trend’ is probably more relevant than talking about it as a trend, but education has newfound relevance as ideas on literacy, equity, race, sexuality, gender, and more change faster than they have at any time in recent history.

Just as profession, race, and income are at the core of ‘racial issues’ (that really aren’t racial issues, but human issues which is why it’s impossible to segment them out that way), education has seen its untouchable image as savior, for some, erode. (See When Class Became More Important Than Race, for example.)

Instead of simply calling on schools to provide social justice, it is becoming clearer to the non-Paulo Freires of the world that education is also implicit in this cultural malaise. And it’s no longer just about race, or slapping a ‘socioeconomic’ label on things, but rather about seeing relationships and connecting a chaotic spread pattern of dots. The purpose of K-12 can’t be ‘college and career readiness’ any more than the purpose of literacy can be ‘word and sentence readiness.’

How should your classroom speak to or connect with current events? It should, right? Should education not inform massive social change? Illuminate it? Contextualize it? Equip us with strategies? Prevent suffering? Help people understand how to live better lives? Promote strong communities?

2. How might the tenets and Benefits Of Social Emotional Learning inform my curriculum, assessment, and instruction?

If we don’t have a clear and clearly communicated purpose of education, it’s difficult to know what to ‘add in’ and what to ‘take out’ because there are only so many hours in the school day. And more humanly, there’s only so much a teacher and school can do and I’ve written over and over again that one of the biggest challenges of public education is that it over-promises–makes claims through problematic school mission statements, for example, that it can’t possibly consistently achieve.

For example, what role do blended learning and eLearning play in the learning of my students? How can I use the strengths of synchronous and asynchronous learning to reduce my workload while supporting student growth?

This leads us to…

See also The Problem With Most School Mission Statements

4. How can I make my teaching more sustainable for me personally?

Getting ‘bad teachers out of the classroom’ is old and wrong-headed, but taking a second to wonder why a good teacher might quit is a fresher take. There is a cost to the push for teachers to innovate their curriculum, assessment practices, use of technology, etc., especially as that push is often at odds with local expectations, and one of the most visible effects is teacher fatigue.

5. What is the purpose of education?

What role should cultural issues play in ‘the classroom’? This issue has been around for millennia–the idea of an ‘elite’ education haunts us as a society. Content-based curriculum has a conditioning effect. It assimilates knowledge, language, image–so many strands of how we think of ourselves and the world around us (something Jamelle Bouie hints at here):

“[C]ontrary to the implications of the burden of acting white and oppositional peer culture hypotheses—that white students generally have superior standards for academic achievement and are embedded in peer groups that support and encourage academic striving—the experiences described by some of our white [student] informants indicate the presence of a much less achievement-oriented academic culture. In interviews, white students describe ostracism from peers and apprehension from parents who want to avoid the perception of “elitism” that comes with children in gifted programs….

None of this is to deny the reality of racialized ridiculing. It happens—I’ve experienced it—and it’s painful. But it isn’t a feature of black culture. Rather, it arises from a mix of factors, from social status to the composition of the school itself. As the sociologists note in their conclusion, stigmatization for whites and blacks seemed to come from the “perception that the low-status student was attempting to assume the character of the ‘other,’ especially an air of superiority or arrogance.”

6. How can I best use parents and community members to support my students–and my effort to help them learn?

Or better yet, how can I help students do so themselves? Place-based education? Project-based learning?

And this is beautiful–this trend of educators as enablers and students as makers and classrooms as creative spaces where human beings actually produce something. Maybe most wonderfully, this trend reflects a subtle realization by education that perhaps proficiency in academic content isn’t as cutting-edge as it sounds. In merely allowing ‘making’ in classrooms, there is a kind of resignation that producing and creating and design are as valuable as listening, reading, and reflecting the priorities set by the teacher.

In a maker space, the maker is empowered and everyone else becomes an audience. This is not a small shift.

1. How can I use non-threatening assessment and data and data visualization tools to improve as a teacher?

2. How can I use cloud-based learning tools like Google Classroom to support my students?

3. How and when and why should we use video streaming, podcasting, and/or related digital media technology?

4. What role can video play in my curriculum?

5. How do I know if a student ‘understands’?

6. How do we know if I’m doing a ‘good job’? If this lesson/unit/curriculum/school/idea is working?

For example, is coding a critical literacy? Is coding the new writing? Should we think of coding as making? There is at least an undercurrent of folks who see coding as not just tech-savvy, but a core digital literacy.

8. What is a ‘growth mindset’ and how can it help me teach and my students learn?It’s no longer about phone calls or emails–there are new(ish) tools that are being adopted by a wider audience.

10. What Is Genius Hour and is it something I can use in my standards-based classroom?

11. How can I use curriculum mapping strategies to improve my teaching?

12. How should we as an industry, update teacher training, and ongoing professional development?

13. How can we ‘teach globally’ while acting locally?

14. What should social media ‘do’ in education?

What about digital footprints? Social media, mainly. Does tweeting matter? How can a hashtag make a difference? The convergence of tool (the hashtag) and opportunity (increase in the visibility, if not the quantity, of digital and social media-based activism) made the last few years underscore both hashtags and social media at large to draw attention to pressing social issues. #blacklivesmatter, #crimingwhilewhite, #yesallwomen, and dozens of non-ironic, run-on appends aggregated social media chatter to something closer to the permanence such activism deserves.

There is an irony here that those on twitter–using hashtags–likely on an expensive mobile device–to discuss edgy cultural issues has a preaching-to-the-choir effect–lots of digital noise for, perhaps, little physical action or substantive change. Social media is ready-made for moral and intellectual posturing which often does little to invite common-ground dialogue.

That said, social change is a multidimensional thing. Who knows what impact X has on Y? That’s a good question to start asking alongside your students.

In other words, tech as a tool versus tech-for-the-sake-of-tech. This isn’t necessarily a 2014-only theme, but it seemed to have a different tone recently–not ‘hate edtech’ but ‘why edtech?’ Ask on twitter and you might get a lot of salty educators who make it their life’s work to stuff as much technology into a classroom as possible, but more and more, teachers want to know why.

Some of these questions to clarify your teaching are get-off-my-lawn pushback, but some questions are entirely reasonable, including: “How can we best use technology? How does it work? What does it allow, promote, and produce?”

Along with letter grades, and ‘college,’ homework is an icon for traditional education. Developing alternatives to homework continues to be a popular idea for teachers. The flipped model of teaching is itself a way of reconsidering what students ‘do’ and where they do it, i.e., the work&; students do

When the iPad rollout in Los Angeles fell on its face years ago, the utility of $30 million in hardware was put into question–and that’s a problem. The popularity of the iPad in education has always been catalyzed by more than a little consumerism, so we might’ve expected some kind of correction.

iPads are expensive mobile devices designed to play apps while glorifying Apple’s ecology. That doesn’t make them evil, but the idea that they were plug-n-play designed for classrooms may be naive.

We’ll talk more about this soon, but Google–and specifically Google Classroom–continues to gain momentum on the ground, in classrooms. In lieu of janky aesthetics and unpolished interfaces, Google’s focus on utility, productivity, and low-cost Chromebooks, in addition to the critical universal sign-in for all Google products, can make management for schools and districts simpler–and schools like simple.

Podcasting feels 2006ish, but it’s actually quite edgy. The podcast has neither died nor exploded, but the quality–and legacy–of podcasting in education certainly seems on the uptick, no?

And video as well–YouTubers, for example. My children prefer them to actors and musicians, to the point where social media isn’t merely a launching pad into the mainstream, but is a stream of its own. Blogging, twitter chats, and other heavy-on-the-reading content (books, and to a degree, magazines) are increasingly supplemented with podcasts, video, and other content that’s easy to absorb on mobile devices.

There are only so many modalities–text, images, video; mixing and remixing them while adding and twisting social dynamics is all part of the evolution.

← The Difference Between A Good Question And A Bad Question The TeachThought Podcast Ep. 288 Depoliticizing News With The Factual →